Team Duct Tape visited Paul Markun’s Tampa Technik machine shop again, this time with an eye to making some design changes. While honored to have earned the Inspire Award at their first competition, team members have heeded the message of not resting on laurels. They seriously evaluated their robot and overall team performance and concluded improvements were in order in a couple of areas.

This week’s visit to Tampa Technik addressed some robot design issues. Under Mr. Markun’s guidance, team members used a variety of tools — this time with much more confidence — and retooled their bucket and reinforced vulnerable areas.

They used a band saw, belt sander, center hole punch, file, tin snips and a polycarbonate heater for shaping Lexan. They were guided in proper measuring and tool use and had an all around good time, in keeping with Mr. Markun’s sage advise that if you’re not having fun, you should be doing something else!

Team members certainly did have fun, and got a lot done in the process. Thank you again, Mr. Markun and Tampa Technik! 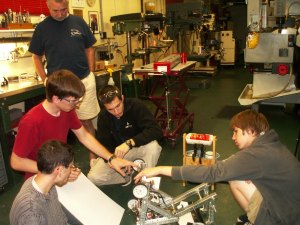