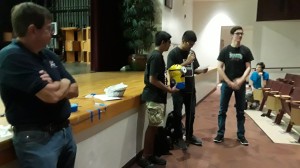 We’ve been so busy since kick-off in early September, we haven’t had a chance to post an update until now.

First of all, congratulations to Marcus of KNO3 for taking home the duct tape Minion in recognition of his great Rover Ruckus game guess, in our annual Guess the Game challenge!  And second, Rover Ruckus is pretty awesome.   The object of the game is to

attain a higher score than the opposing alliance by descending from a central platform called “the Lander”, collecting Minerals (blocks and balls) from the Crater, sorting and scoring Minerals into the Cargo Hold of the Lander, performing Autonomous tasks, and navigating to specific parts of the Playing Field.  You can see the Rover Ruckus game animation and other related game specs on our Library page.

We’ve also been super busy with outreach, hosting an Open House at Regency Park Library back in August, where we recruited three new members for Team Duct Tape (Meet them here!)  and representing at the Tampa Innovation Alliance annual Gathering.  We also enjoyed some build and practice time at ROBOTICON Tampa Bay, hosted by our nonprofit sponsor, Foundation for Community Driven Innovation  at the University of South Florida.  Over 4000 people attended ROBOTICON where all four FIRST programs got to play and learn together.

Now it’s nose to the Rover Ruckus grindstone in the hopes of being able to compete in an early November meet.  Good luck to all our R.O.B.O.T. League teams this season!